How I got into Army Red/White 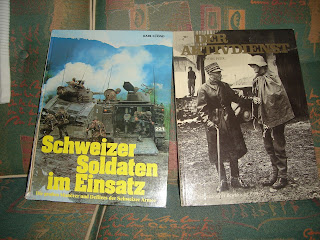 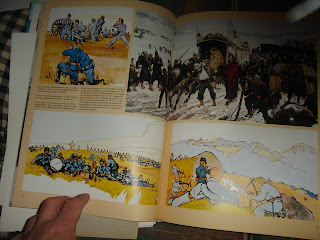 ...I blame family holidays to Switzerland at an impressionable age and Elastolin for beginning my Swiss interests. 40mm landsknechts,60mm (?) trappers and Indians and modern day (early 70s that  is) composition figures all fuelled it. My parents bought me an Elastolin castle,now sadly gone, which my 40mm chaps fought over valiantly.
In the later seventies (I think) I picked up the above books - one surveys the Swiss Army throughout history and the other concentrates on ww2.I have posted pictures of just what inspiration they contain inside and out.Now if only I could find out more about Freyerabend and his paintings of late 18th century Swiss troops called up  to fight Bony and his hordes...but thats another story for another time- yes ok it was that Military Modelling article that has remained in my mind,I wish I had cut it out!
Posted by tradgardmastare at 11:27