San Martino- in the light of poll results so far some imaginationeering.... 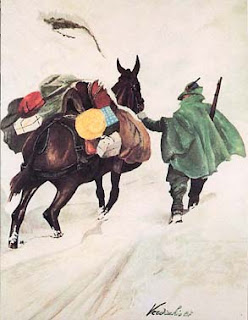 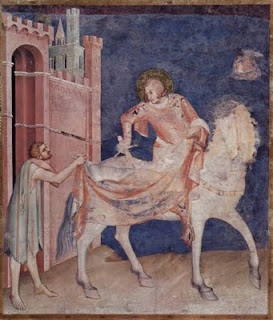 Morning all! In the light of the way the poll was progressing I thought I might get a few of my notes together re an opponent for Army Red/White.

Featured here is a fresco from the renaissance of the founder of the state- San Martino. He was a Roman soldier,benefactor of the poor and ,according to local legend ,was the benevolent local Governor of the city that has become the small but perfectly formed small state that is San Martino. He is depicted here cutting his own cloak to give half to a beggar- an idea he is said to have copied from his name sake St Martin the martyr of Tours.

San Martino is a small state which is tucked neatly betwixt Italy and Switzerland I believe, sheltered high in the mountains for the main part. It's history ,customs and lore will ( if it is the winner of the poll) be shared here over the coming months ahead.

I have also posted a picture of a member of the Guardians of the Border Regt who are responsible for patrolling the border with the neighbouring countries. Out in all weathers and expert in mountain warfare this elite light infantry unit is San Martino's first line of defence.


Posted by tradgardmastare at 23:12 3 comments:

As I was working on my Army Red/White (Swiss) I wondered if it might be fun to collect an opponent for them at the same time- working on/collecting both armies in tandem. I would like your opinion on what enemies army Red/White will fight against. Background scenarios to be worked out later. All you have to do is vote at the poll alongside. Thanks for taking part
Posted by tradgardmastare at 23:12 4 comments: 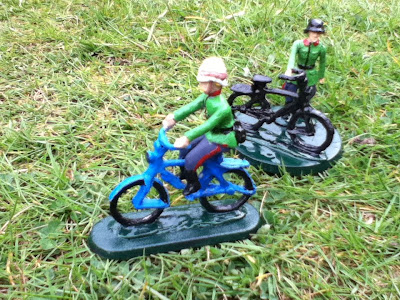 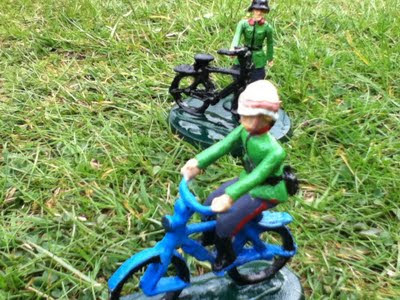 I'm on my Easter hols and I thought I would show you what I painted this afternoon...
Here is an Army Red/White general resplendent in his Dragoon uniform and sporting a rather fetching pith helmet from his days in the Swiss Geographical Society. He is accompanied by a Staff Officer wearing the traditional Dragoon uniform along with one of those new fangled experimental steel helmet. Both chaps are equipped with bicycles to aid mobility upon the battlefield. I hope that these are the first of many as the days lengthen and Spring moves ever forward.
.
Posted by tradgardmastare at 09:01 No comments:

Found these a few minutes ago- sorry I can't make them larger... but enjoy anyway!
Posted by tradgardmastare at 23:54 No comments:

Beware those dashing and tempting tricorns... 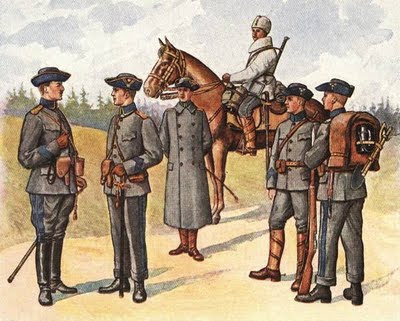 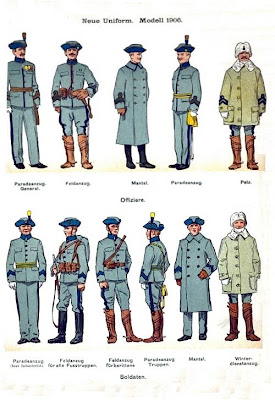 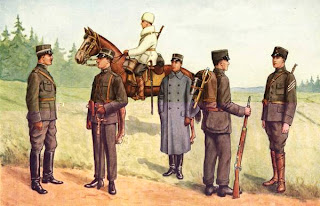 Morning chaps! I have just come accross these fantastic pictures of (from top to bottom) the 1910.1906 and 1923 model Swedish uniforms...
These chaps would make a dashing stir upon the tabletop,sorry grass,in our world of FLW - especially those sporting the tricorn!
Posted by tradgardmastare at 22:47 1 comment: