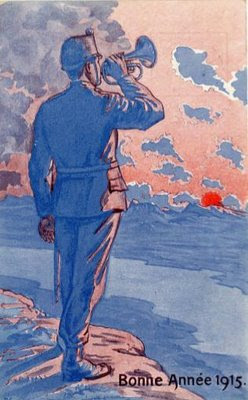 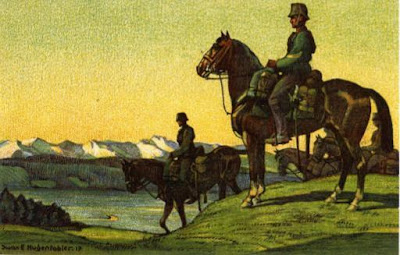 I post these two evocative images for your enjoyment. The 1915 Happy New Year card is a poignant reminder of people hoping things would be better in the coming year . The other picture appeals to me as an evocation of Switzerland and another age...
Posted by tradgardmastare at 23:24 No comments: 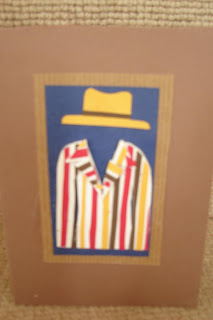 My daughters made this card for me for Father's Day. It was beautifully hand-crafted from paper and card and looks fantastic. What could be more appropriate for a FLW chap...
Posted by tradgardmastare at 07:09 No comments: 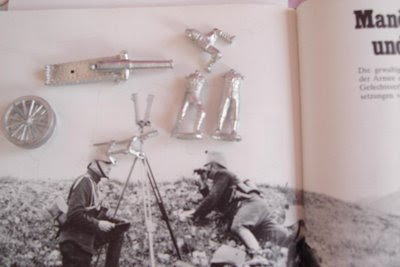 Giles from Dorset Miniatures sent me this superb firing mountain gun and crew today. It will look fantastic when painted. Not only that but it fires well too. Pictures of painted gun and crew soonish I hope
Posted by tradgardmastare at 05:58 1 comment: 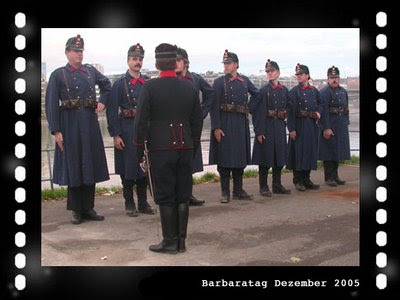 Rost and Grunspan are a superb Swiss reenactment group. They depict ww1 and ww2 Swiss soldiers.They have a most interesting website.If you click below it will take you to a page showing moving images from 1912 as well as the Group today:

Well worth a look and do explore the site too. Lots to see and inspire those of us who favour Army Red/White...

Posted by tradgardmastare at 11:17 No comments: 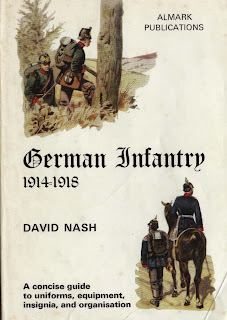 This book has been on my bookshelves since 1971!!It contains superb illustrations in colour and useful other material too. It has provided me with inspiration for my first figure for my opposition for Army Red/White. He has painted up well and will look excellent as part of a unit. More information soon...
Posted by tradgardmastare at 12:17 No comments: 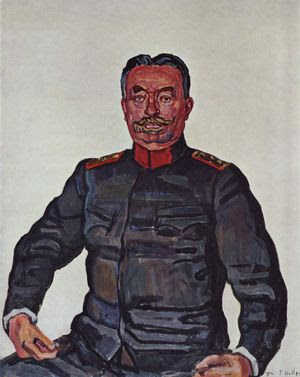 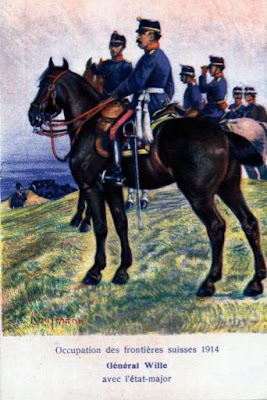 Another picture re High Command- General Wille
- Commander in Chief 0f theSwiss Army inWW1.
At the dawn of the First World War, Switzerland confirmed its will to remain neutral and to avoid the conflicts which were going to set Europe ablaze. However, Switzerland was divided between the German-speaking Swiss who favored the Central Powers, and the French-speaking Swiss whose opinions tended to support the Allied Powers. As a Germanic-speaking Swiss, and close to Kaiser Wilhelm II, Wille benefitted from the pro-Germanic current and the disparity within the Swiss Federal Council, which counted only one member from the French areas [1]. In 1914, at the outbreak of warfare, a general mobilization of all military forces was issued. Wille, then a Colonel, was named General of Switzerland by the Federal Parliament on August 8, 1914 with 122 votes, against 63 votes for the other candidate, Theodore Sprecher von Bernegg[2]. Von Bernegg would soon assume the rank of Chief of the General Staff and a reliable partner of Wille's. The opponents of the general described him as “militarist” whereas his partisans saw in him a chief ready to manage an army in mobilization thanks to his pedagogical talents. Wille decided to concentrate the bulk of his forces (238,000 men and 50,000 horses) close to the borders, particularly in Ajoie and Engadine
Posted by tradgardmastare at 06:25 No comments: 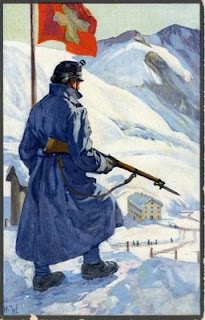 As army red/white progresses well towards Brigade level and beyond I am looking for ideas to move towards collecting so I can field small games here at home. Your suggestions and rationale for them are eagerly sought...
best wishes
Alan
Posted by tradgardmastare at 06:21 No comments: 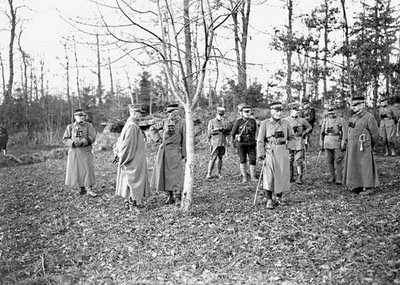 I am currently looking for inspiration for my Command figures for FLW. I found these images which have set me thinking.
I particularly like the greatcoats in one picture and the poncho-style /riding capes in the other one. Ideas for conversion possibilities would be appreciated... 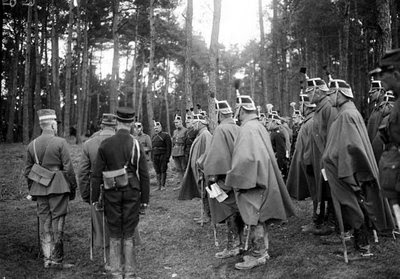 Posted by tradgardmastare at 11:27 No comments: 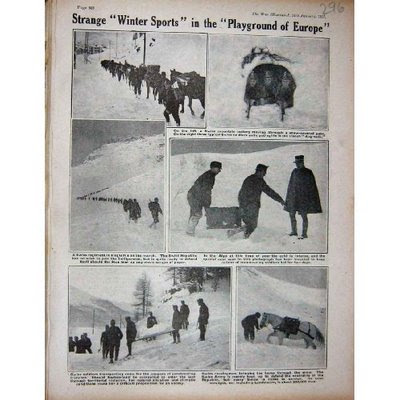 A couple of pages from a ww1 period magazine depicting Swiss mountain infantry. 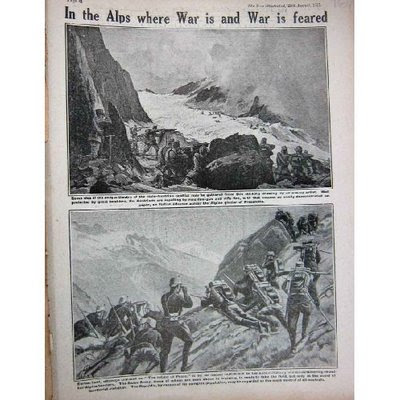 Posted by tradgardmastare at 10:33 No comments: 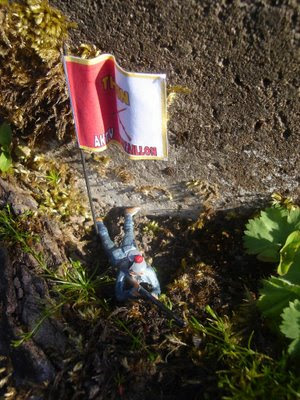 High in the Swiss Alps Army Red/White is ever vigilant for invaders...
The photos depict two members of the 2nd Thun Mountain Infantry Regiment. With them is their Regimental Colour - kindly personalised by TVAG,thank you Sir!
The men are wearing the new feldgrau uniform newly introduced to Army Red/White. The 1st Thun Regiment has retained the older blue uniform for the present. 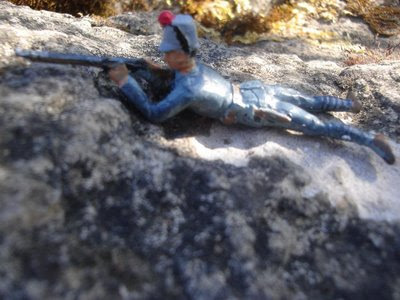 Posted by tradgardmastare at 10:11 2 comments: 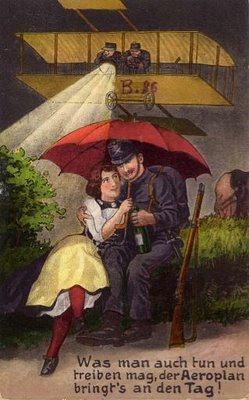 Army Red/White takes to the skies with these magnificent men in their flying machines.
Another weekend over -painting done,gardening too and I hope you have a good week ahead.With some sun- fingers crossed! 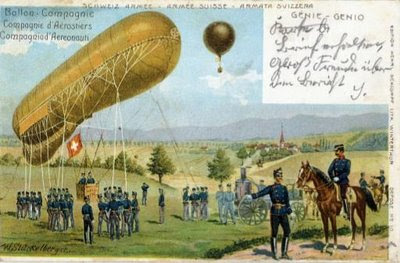 Posted by tradgardmastare at 12:03 No comments: 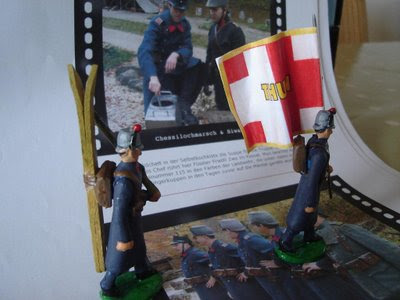 The first figures are nearing completion. Giles at Dorset has done me proud with his designs- thanks Giles! Note personalised flag (thank you TVAG !) with "Thun" upon it, skis courtesy of Ikea and the background features Swiss re-enactors in period uniforms. More figures ( and theses finished) tomorrow ...
Posted by tradgardmastare at 09:37 No comments: 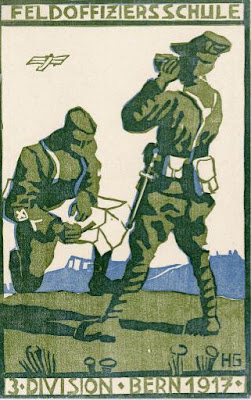 Today I got up at 6.45 a.m and carried on painting Mountain Regt Thun- pictures very,very soon! In the meantime here are some pictures of Late WW1 Swiss including an anti-aircraft gun, some unusual headgear and an officer observing an enemy aeroplane. Hope they inspire you too- I would love to see a model of the adapted field gun in Funnylittlewars... 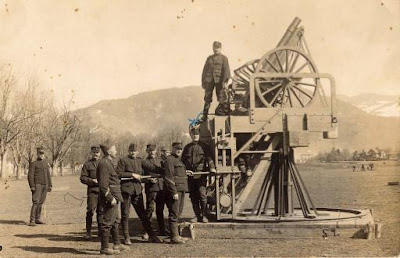 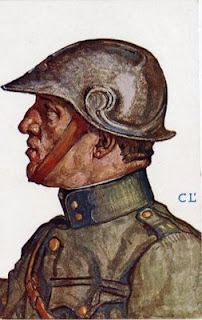 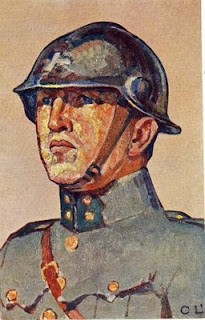 Posted by tradgardmastare at 06:31 No comments: