The beloved old Emperor is dead.The new Emperor has left by train,the new Republic has begun...
Thus Army White is taken from the days prior to glorious summer of '13,through the Great War and beyond into the interwar period... 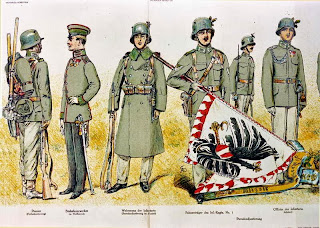 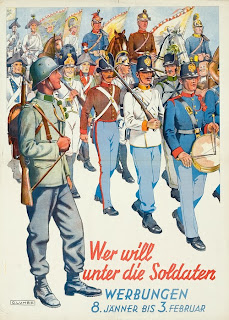 And so begins my FLW project for autmn and winter -moving into the interwar period with Army white now known as Army White (Republican) for the moment.
Part the first- A rainy day in Fife
This morning saw me uptown on a mission to post a parcel in the Post Office.The rain lashed and I popped into Poundland on the lookout for hobby inspiration and bought the following- 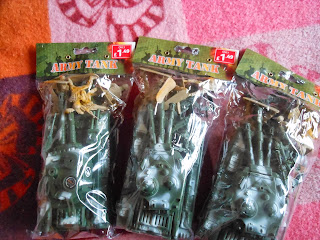 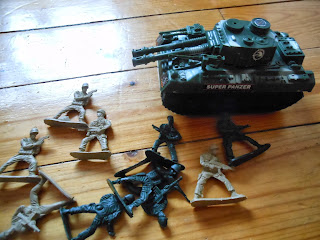 And so with much ingenuity I will attempt to use the basic chassis of the plastic tank to build 3 tanks/tankettes(perhaps a tad too big?) for an interwar army.If anyone wants the army men and turrets/mgs let me know .You are more than welcome to them.I will pop them in the post for you next week.


Posted by tradgardmastare at 04:57 3 comments:

Matters of taste on the other blog

I wonder if you could pop over to my other blog and help me solve a dilemma of matters of taste and the deployment of toy soldiers -
http://tradgardland.blogspot.co.uk/
Many thanks!
Posted by tradgardmastare at 08:42 No comments:

I am interested to know if anyone knows about wargaming taking place in Germany prior to the Great War? Was Little Wars used for example?

I am not interested in finding about the use of kreigspel but rather early figure gaming?
Thanks
Alan
Posted by tradgardmastare at 23:52 1 comment:

I have an Elastolin compostion chap bought circa 1970 in Switzerland.Here he is- 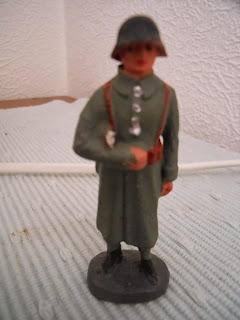 I have seen these instant reuseable mould compounds of late.Would they work with him or would he be ruined.I would really like to make copies of him. I feel there can be no copyright issues after all these years.
Any suggestions etc welcome.
Posted by tradgardmastare at 05:12 1 comment:

I have been on Pathe news this morning.Do pop over here for a splendid piece of footage and don't forget to listen to the commentary-
http://www.britishpathe.com/video/bump-and-bounce
When FLW moves into the 20s and 30s we must commentate upon our games in such a splendid style (:
Posted by tradgardmastare at 00:39 2 comments: 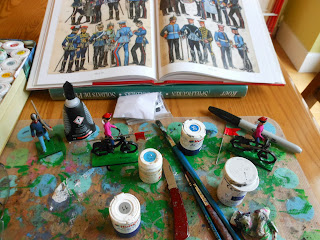 Back at the doc's today and I was signed off for another three weeks. I thought I would share an image of the painting area I am using on a semi(very)permanent basis at present.Anyone care to guess the identity of the books used for inspiration or the nationality of the figures currently being worked upon?

Posted by tradgardmastare at 09:05 4 comments: