Duchy of Tradgardland,late October 1912 or Do the Strand (with apologies to Roxy Music)

Duke Albert is enjoying brandy and cigars after dinner.Alone at last he flicks through old copies of  The Strand Magazine.His eyes alight upon an article and the accompanying pictures- 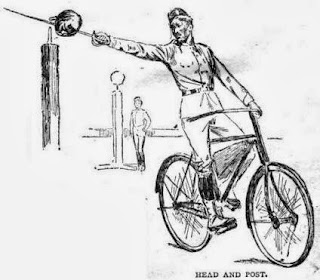 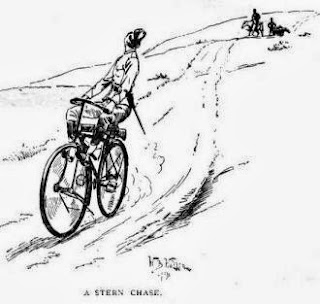 As the evening wears, on and the decanter is refilled, Duke Albert has an idea...
The next morning after a splendid breakfast of herring kedgeree and coffee Duke Albert takes a walk round to the Palace Stables and talks to his old friend Col Gustav Adolf Ekdahl.

Dear Reader,by the wonders of the ether and steampowered technology you are invited to read the article Duke Albert read 101 years ago here-
http://www.25thlondon.com/regeiment-on-wheels.htm
I hope you enjoy it and please leave your comments as to what you think Duke Albert and Col Ekdahl were talking about...

Posted by tradgardmastare at 23:43 2 comments:

A knock on the door during tea...

Tuesday morning 6.30 am
Tea last night was interrupted in a most pleasant way- a delivery from parcel post.My keenly awaited parcel from Berlin had arrived.I was on the Berlinner Zinnefiguren site last week and clicked onto a bargain- 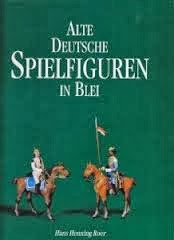 Great in itself but there was more in the shape of- 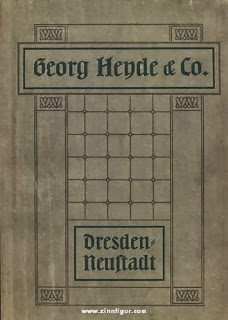 A reproduction of the Heyde catalogue from the 19th century.Both books are most interesting- the former being a large format hardback awash with inspirational colour photographs and text in English,French and German.
I am looking forward to reading more today.
My sample figures (not from BZ by the way) arrived the day before and I hope to work on them this morning.I hope that they may be a 54mm step forward but it is early days.Decapitating one and doing half of the same to another when bending limbs was not a good start...
Posted by tradgardmastare at 22:44 1 comment:

Terraforming Tradgardland or the guns of August 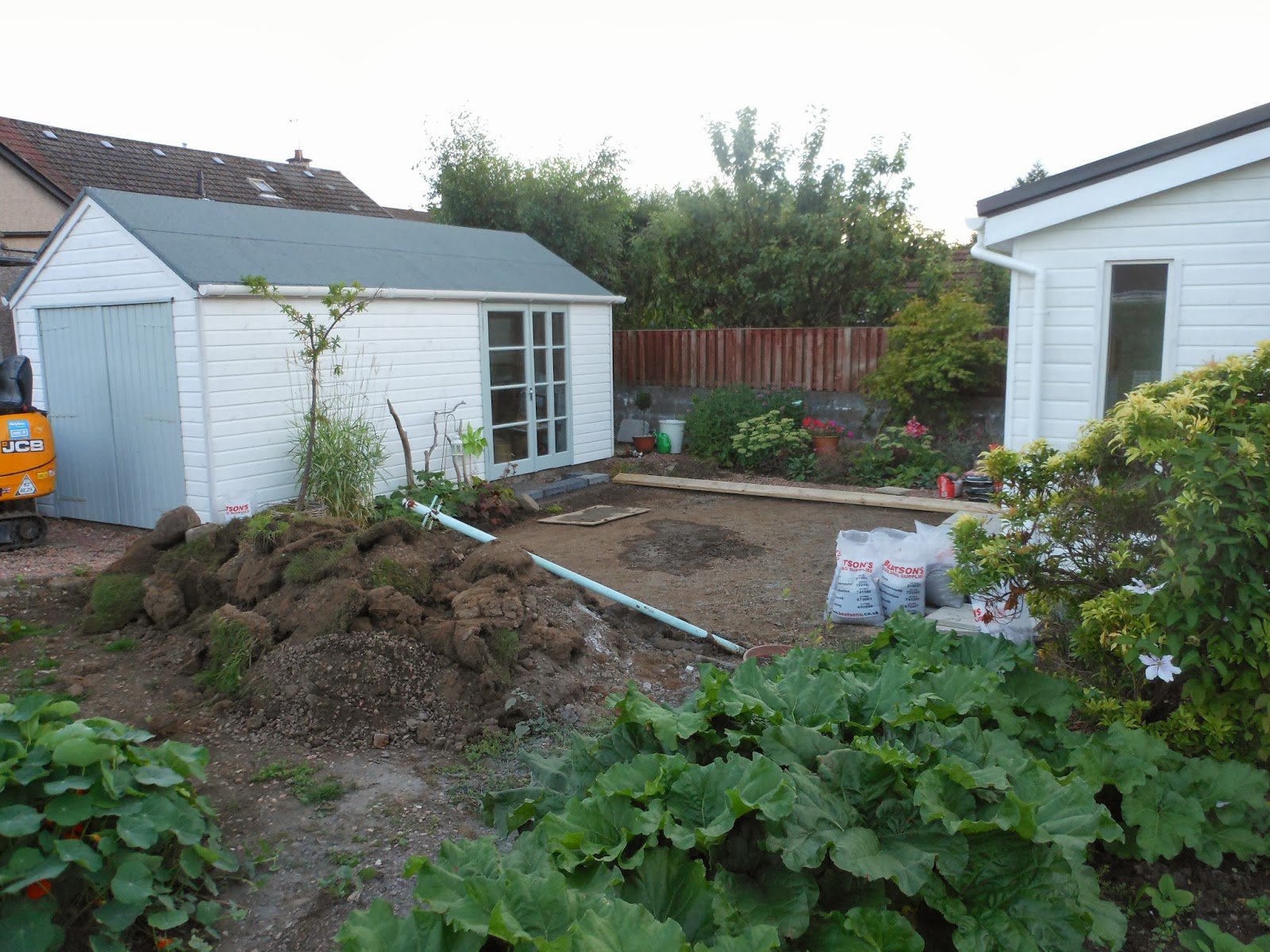 Much work has been done over the summer in the Duchy.This is a picture of the work in progress and below is the spoil heap/mess left by the builders.It will have to wait weeks until I can attempt to deal with it- 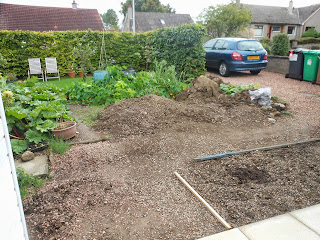 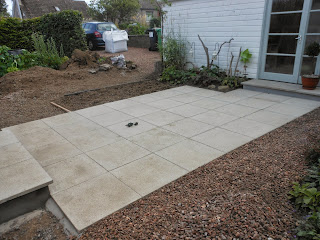 The patio/place for garden chairs&table/troughs/alpine pans will also serve excellently as an "all weather" pitch for FLW games. Astro turf for lead armies I guess. The photo was taken on the last day of August with gun/guns hence the post title.
Anyway the other day I drew the layout in my moleskin and mentally batted around some plans.Please click below on the photo to have a better look- 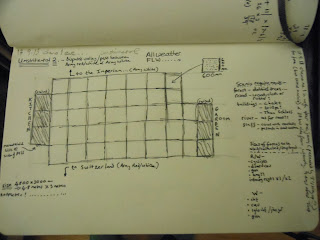 Basically the paved area will be a disputed pass or valley between the countries of Army Red/White and Army White.The steps will be the mountains on either side of the pass/valley.terrain will be added to be lifted between games.A flower border will be planted which will soften the edge of things too.I am most excited by this project and also feel "Winter Quarters" will give a chance to plan and paint in preparation for gaming next summer.
Finally with reference to my last post I may have found  a source of some potentially Spenkuch/Alte Deutsche/Heyde  reproduction/style of type figures in 54mm. More anon when samples arrive and are painted...


Posted by tradgardmastare at 12:24 3 comments:

Morning musings or the Spenkuch look

I rose this morning at five o'clock which left many quiet hours before the House stirred. I cannot post my alfresco pictures as my daughter (I fear) has taken the camera off to Uni.
However this gives me a chance to post about some thoughts I have been having re the FLW hobby of late.I am increasingly drawn to the German old toy soldier look of things.Maybe it is nostalgia for a simpler age or my Germanic genes calling me I don't know.Whatever it is I am being attracted to gaming with such an aesthetic. what would this mean for my gaming.Firstly terrain- 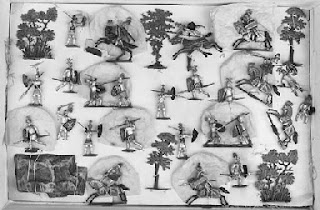 The simple two dimensional trees etc as shown in the above set. Two dimensional houses such as the example above from Spenkuch. 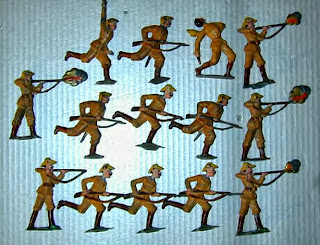 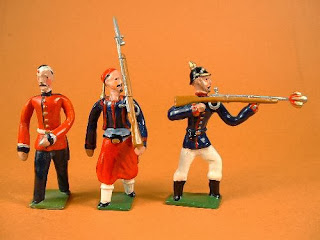 Much to think about and plan...off to do some chores then a wee seat I think.
Posted by tradgardmastare at 01:08 2 comments:

Sunday afternoon in a showery Tradgardland.
I'm taking the opportunity when Jan is driving Anna back to university this afternoon ( with her sisters and granny riding shot gun) to post. Anna was 18 yesterday and we all enjoyed celebrating her birthday . We drove her down for freshers week last Saturday ( which went really well) and she came home by bus on 13/09. I had my operation on the 9th and all has gone well.I am signed off work until the 4/10 and need to rest to aid recovery.Jan has her first Chemo this coming Wednesday.
I hope to get some projects up and running ( have started a little ) as I am useless except for light duties in  and around the home. I have started the 6th Sidebottom novel ( set mainly in 3rd century Scandinavia) and am enjoying it.I watched "Papillon" on dvd this morning and it remains an excellent film to watch,I'd not seen it for years.
The building works ( terraforming) externally have added a potential new aspect to FLW gaming here.More will be revealed anon when I can download the photos I took at the end of August. I have received the 2nd volume of the Padre's masterwork and an excellent read it is too.Most inspiring as no doubt many of you will have found out already.Although the weather was so beautiful here yesterday that Jan and I managed to sit out nevertheless I feel Winter Quarters beckoning and some modelling to be done prior to next year's al fresco gaming season.